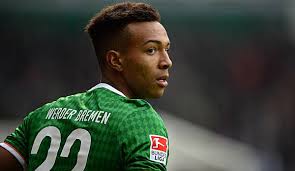 Werder Bremen forward Melvyn Lorenzen has revealed that he is still doubting whether to commit his international future to Uganda.

It means the 21-year-old will not play for the Cranes in Saturday’s Africa Cup of Nations qualifier in Botswana.

“Decision time [for Lorenzen] will be after the match against Botswana,” Uganda FA communications manager Ahmed Hussein said.

He impressed for Uganda in a friendly 2-0 loss to Zimbabwe on Tuesday.
Lorenzen was born in London and qualifies to play for Uganda through his father, he also has German citizenship thanks to his mother.

Uganda coach Milutin ‘Micho’ Sredojevic praised the contribution Lorenzen had made during his time with the squad.

“We shall definitely miss the extra impetus he would have brought to the team as we saw in the friendly match against Zimbabwe,” the coach said.

“So for now we shall concentrate on the able players we have in the team to accomplish our mission.”

The coach will be worried about the fitness of striker Faruku Miya, who plays in Belgium for Standard Leige, after he missed the loss to Zimbabwe with concussion.

The Cranes will also be without US-based midfielder Mike Azira, who has chosen not to join the squad stating due to fatigue after a busy MLS season with Colorado Rapids.

Moses Oloya also misses out having stayed in Vietnam in order to recover from injury.

Uganda are level on seven points with Burkina Faso in Group D, but the Cranes are second on the table because the Stallions have the better head-to-head record between two.

ABOUT US
Herosports Newspaper is a sports brand that is essentially put in place to galvanize sports development through incisive, educative and entertaining reportage
FOLLOW US
© 2016 - All Rights Reserved Hero Sports Newspaper Website Design by: [D] Deluxe Links
MORE STORIES