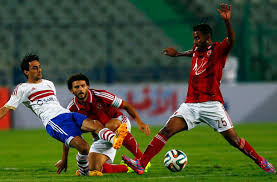 According to the statement released by club during Wednesday’s match between their rivals Al Ahly and Arab Contractors, who had two players sent off in the game.

The club said the Egyptian Football Association’s refereeing committee intended to “gift the title” to Ahly.

“The club’s board of directors, under the leadership of chairman Mortada Mansour, decided not to continue this league competition as long as the refereeing committee and its head Gamal El-Ghandour remain in their position,” Zamalek said in their statement.

“The decision comes due to disastrous refereeing errors. At a time when an illegitimate goal by Maqassa against Zamalek was allowed to stand [in Sunday’s league match], Contractors had two players wrongfully dismissed against Ahly.

“This clearly shows an intention to gift the title to Ahly amid a dishonorable competition.”

Two Contractors players received straight red cards for protesting against a goal by Ahly striker Malick Evouna in the first half of Wednesday’s match.

Zamalek chairman Mansour has previously made threats that the club would quit the league but they have never been carried out.

The club, whose title success last year was their first since 2004, are due to play ENPPI on Thursday.

Dybala, Durant and Gaviria among the American Athletes suffering Covid-19

ABOUT US
Herosports Newspaper is a sports brand that is essentially put in place to galvanize sports development through incisive, educative and entertaining reportage
FOLLOW US
© 2016 - All Rights Reserved Hero Sports Newspaper Website Design by: [D] Deluxe Links
MORE STORIES